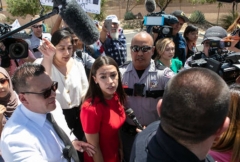 Rep. Alexandria Ocasio-Cortez sent out a tweet on Thursday afternoon recalling a visit she made to the U.S.-Mexico border in 2019, and stating that during her visit “there was a mob 2/knives & guns feet away and CBP refused to protect the delegation.”

Ocasio-Cortez sent out the tweet to compare the way she and some fellow Democrats have responded to mobs as opposed to the way Republican lawmakers have.

“One thing that always astounds me is the GOP’s talent for neglecting key issues until it affects them personally,” she said.

“They couldn’t care less when Trump used his mob to put their colleagues lives in danger, yet are only noticing how bad it is when the threat’s been turned on them,” she said.

“For two years many of us have been subject to extremely violent threats, attempts, stalkers & targeted misinfo,” said Ocasio-Cortez.

“When I went to the border, there was a mob w/knives & guns feet away and CBP [Customs and Border Protection] refused to protect the delegation,” she said.

“What did we do?” she said. “We did the press conference anyways.”

On July 1, 2019, Ocasio-Cortez visited a migrant detention center near the U.S.-Mexico border in Texas. After the visit, she sent out a tweet.

“I see why CBP officers were being so physically&sexually threatening towards me,” she said.

“Officers were keeping women in cells w/no water & had told them to drink out of toilets,” she said.

“This was them on their GOOD behavior in front of members of Congress,” she said.

The Guardian published a report about Ocasio-Cortez’s visit that said:

“Following a visit to a migrant detention center in Texas on Monday, the New York congresswoman Alexandria Ocasio-Cortez called conditions ‘horrifying’ and denounced sexualized threats against her – allegedly made by Customs and Border Protection (CBP) officers – in the lead-up to the visit.

“Ocasio-Cortez and Democratic colleagues were en route to a facility in Clint, Texas, when ProPublica revealed the existence of a secret Facebook group, branded as a forum for CBP officers, with 9,500 members, some of whom ProPublica linked to public Facebook pages for verified officers.

“Posts in the Facebook group included one that encouraged officers to throw a ‘burrito at these bitches,’ one saying ‘F[***] the hoes,’ one saying ‘There should be no photo ops for these scum buckets,’ and one depicting Ocasio-Cortez engaged in oral sex at a detention center. Another post questioned the veracity of a recently published photo of a drowned father and daughter in the Rio Grande.”