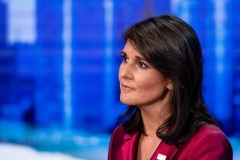 (CNSNews.com) – Twitter and other social media companies talk about their “free speech” model but don’t live up to it, former Ambassador to the United Nations Nikki Haley said on Wednesday.

She noted that those companies “shut down the president of the most free country in the world,” while allowing the leaders of Iran and China to continue posting.

“And I just think it was a gut reaction,” Haley told Fox News’s Martha MacCallum. “I think it was an emotional reaction. All it did is raise the tensions and the passions of all of the Trump supporters higher and make things more dangerous.

“If they had taken their time and calmly introduced what they were thinking to the rest of the country, it would have been a different story. But all they did was show more of a power grab. And that offended a lot of people. I think it’s going to backfire.”

Haley spoke after Twitter CEO Jack Dorsey issued a series of tweets defending Twitter’s decision to permanently suspend Trump’s account “due to the risk of further incitement of violence,” as Twitter explained it last week.

I do not celebrate or feel pride in our having to ban @realDonaldTrump from Twitter, or how we got here. After a clear warning we’d take this action, we made a decision with the best information we had based on threats to physical safety both on and off Twitter. Was this correct?

Yes, we all need to look critically at inconsistencies of our policy and enforcement. Yes, we need to look at how our service might incentivize distraction and harm. Yes, we need more transparency in our moderation operations. All this can’t erode a free and open global internet.

It’s important that we acknowledge this is a time of great uncertainty and struggle for so many around the world. Our goal in this moment is to disarm as much as we can, and ensure we are all building towards a greater common understanding, and a more peaceful existence on earth.

Dorsey also noted that a “company making a business decision to moderate itself is different from a government removing access, yet can feel much the same.”

MacCallum asked Haley if she feels like she’s living in one of the repressive regimes she once covered as U.N. ambassador:

Haley said while she’s bothered by the censorship, her main concern is the failure of our nation’s leaders to “get our priorities straight.”

Now, the reason why I think this is all a concern is, whether it’s this impeachment stuff, whether it’s shutting down social media, whether it’s corporations taking stances one way or the other, what bothers me more than anything is that I feel like both sides, the country, they have lost their focus.

The priority needs to be on the fact that we — millions of people have lost their jobs. You have got children who’ve lost a whole year of education that we have got to figure out how we’re going to get it back. We have got vaccines we have got to distribute. And you have got small businesses who are literally dying by the day.

And what’s worse is, you have got this impeachment hearing that’s being rushed through, And China, Russia and Iran, they’re watching the fact that we can’t even build a government.

I mean, this is the time where President-elect Biden needs to be putting Cabinet members in place and getting their government in place.

And, for me, who’s watched these countries and dealt with these countries, it’s very dangerous for our national security for them to see an impeachment process taking place, and not building out a government.

And everybody’s got to take notice of that. We have got to get our priorities straight. Stop the whining. Stop the complaining. Stop the finger-pointing. And let’s get to work. That’s really what needs to happen.

Haley, a possible presidential contender in 2024, credited Trump with adding people to the Republican fold. “He brought in a part of America that had not been heard, had not been seen, and had not been understood.

“And I think that was an important segment that we wanted to have. But he lost the suburbs, and he lost a lot of women. And what we have to do is pick those up. But I want to go even further.